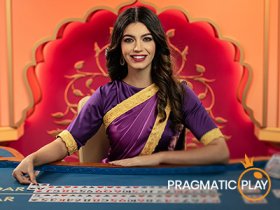 Pragmatic Play, the famous international provider of live dealer games and video slots for online casinos, has announced the release of two brand new live casino titles, both with a distinct focus on the Indian market: Andar Bahar and Roulette India.

Both games are broadcast from the company’s world-class studio located in Bucharest, Romania, which features multiple 4K cameras and 24/7 availability. However, the background, decorations and even the presenters’ outfits are designed to make players feel like they are in a lavish Indian land-based casino.

Roulette India combines that land-based feel with the unique interaction with the charming presenters and accessibility of online play. It is the last product in a rich series of localized live roulette versions released by Pragmatic Play, after Roulette Germany, Roulette Italy, Roulette Russia and Roulette Macao.

An Ancient But Popular Game

Andar Bahar is a very popular card game especially in India, it is believed that this game was created in Southern India a few centuries ago. The rules of the game are extremely simple and that is probably why Andar Bahar gained so much popularity not only in India but in all corners of the world.

The game has two special sections, “Andar” and “Bahar”. The dealer starts the fun off by drawing a single card, the Joker, which is placed in a specially designated space on the table. Additional cards will then be drawn one by one and placed alternately in the “Andar” and “Bahar” sections of the table. The goal of the game is to find a card of the same value as the Joker that was drawn in the first place.

The version released by Pragmatic Play is expected to deliver a familiar betting experience for fans of games such as Blackjack, Baccarat or Dragon Tiger. Moreover, this live dealer game also offers Poker-style side bets, such as a Straight Flush, adding even more thrills to the gameplay experience.

Pragmatic Play started out in 2013 under the name of Extreme Live Gaming. In 2018, slot provider Pragmatic Play acquired Extreme Live Gaming and integrated the live dealer titles and team into their company. The company has its main offices in Gibraltar, Isle of Man and Malta, but it also owns development and operational offices in Belgrade, Bucharest, Buenos Aires, Cardiff, Hyderabad, Kiev, London, Noida and Zhytomir. Their games can be played at multiple online casinos around the world, including the biggest and most reputable brands in the industry.