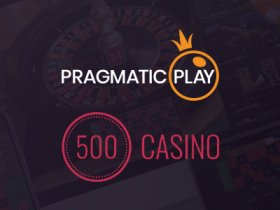 Pragmatic Play, one of the world’s most powerful providers of slot games and live dealer games for online casinos, has announced that it has reached an agreement with 500 Casino, one of the oldest CSGO & crypto casinos.

The deal stipulates that 500 Casino will gain access to products from both verticals provided by Pragmatic Play, so the casino’s offering will be enriched both with slot games and live casino titles.

This means that customers of 500 Casino will get to enjoy award-winning slot games such as Gates of Olympus, along with fresh but popular titles such as Gorilla Mayhem, Magic Money Maze and Greedy Wolf.

Moreover, the online casino will be able to invite its players to enjoy live casino titles from Pragmatic Play, including Blackjack and Roulette, along with the innovative Boom City and the very creative Sweet Bonanza CandyLand.

The quality of Pragmatic Play’s products was recognized at the end of 2021, when the supplier was distinguished with one of the most important prizes at SBC Awards 2021: Casino/Slots Developer of the Year. The panel of judges said that their decision was based on the provider’s unrivaled product portfolio and continued commitment to innovation.

Top casinos in In

A Seal Of Quality

Speaking about the agreement with 500 Casino, Irina Cornides, Chief Operating Officer at Pragmatic Play, revealed that such deals are very important to the company’s “multi-vertical strategy.” The Pragmatic Play executive added that the agreement will expand the supplier’s footprint in regulated markets such as Latin America, Africa and Europe.

Christoffer Andersson, Chief Operating Officer at 500 Casino, added that the operator is constantly looking for ways to add “the best games available on the market” to its offering, and expressed his delight at having reached an agreement with Pragmatic Play.

In fact, the 500 Casino representative pointed out that the games supplied by Pragmatic Play “provide a seal of quality to any casino” and underlined the importance of having added both slots and live casino titles to the offering.

The live casino supplier started out in 2013 as Extreme Live Gaming and in 2018 it was acquired by slot provider Pragmatic Play, which integrated the live dealer titles and team into their company. The developer has its main offices in Gibraltar, Isle of Man and Malta, but it also owns development and operational offices in Belgrade, Bucharest, Buenos Aires, Cardiff, Hyderabad, Kiev and London.