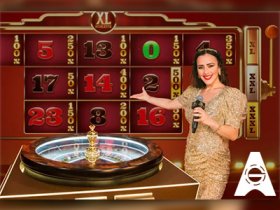 The new game has drawn inspiration from the very popular Lucky Number game show, which was first released by Evolution and then adopted by almost all other live casino suppliers.

Authentic Gaming have taken the whole concept one step further with XL Roulette, introducing lots of new twists that should give players a lot more entertainment value. In fact, the players will be able to influence how many of the numbers of the next spin will be “lucky”.

However, if a player doesn’t like this twist, there’s always the option to make the switch to the traditional roulette gameplay. XL Roulette is broadcast from the company’s state-of-the-art studio in Malta.

This setup should attract both types of players, those who enjoy a classic roulette game will enjoy the larger payouts while the thrill seekers will surely be willing to pay to boost their chances of winning massive prizes with the help of the “Lucky Numbers”.

A Special Product For The Indian Market

The game is available exclusively at Betway, the gaming website that has gained the trust of the Indian players during the past few years. Cricket Live Roulette has been developed especially for the fans of the sport, which has a huge following in the country.

Behind the roulette table the players can see a live scoreboard which will keep them up to date with the action and scores from the Indian Premier League and other cricket events around the world.

Authentic Gaming was founded in 2015 and started with just three employees. Now the company is well-known in the industry around the world, offering unique video slots and live dealer games to several clients.