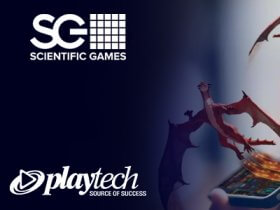 Playtech, one of the world’s most prominent providers of video slots and live dealer games for online casinos, has signed a mutual global distribution agreement with Scientific Games Corporation, another industry giant.

This partnership, forged between two of the biggest players in the iGaming industry, will allow both Playtech and Scientific Games to expand their reach in the United States, along with other regulated markets in Europe and Latin America.

Playtech’s video slots and live casino games will be available to casino operators that use the Open Gaming System developed by Scientific Games, a huge collection of slots, table games and live dealer games.

The first territory that will see Playtech’s games included in the Open Gaming System is New Jersey, while other American states will follow in the coming weeks. The Open Gaming System built by Scientific Games is one of the world’s biggest iGaming platforms, with over 2,500 games from several world-class studios.

Along with the games, the platform also offers enticing features such as jackpots, free-rounds, missions and tournaments. Moreover, the platform also contains responsible gambling tools that are easily accessible during gameplay.

Scientific Games was founded in 1974 and it has its headquarters in Alpharetta, Georgia. The company has a strong focus on Canada as well, the games that they create for this market are produced entirely at the company’s manufacturing facility located in Montreal.

In April, the Scientific Games Corporation announced the launch of a new online iLottery subscription program in partnership with the Western Canadian Lottery Corporation. A few months earlier, the American company decided to extend its long-standing contract with Loto-Quebec, a deal that has been in place for no less than 50 years.

A Major Impact On iGaming Across The Globe

Speaking about the mutual distribution agreement with Scientific Games, Shimon Akad, Chief Operating Officer at Playtech said that he believes the deal “is set to have a major impact on iGaming across the globe”.

“This partnership will significantly increase SG’s distribution to regulated markets in LATAM and Europe whilst also providing our customers in those markets with an even richer portfolio of exciting iGaming content,” Shimon Akad added. “Playtech looks forward to benefiting from SG’s leadership in the U.S. as we look to roll out Playtech casino software in all regulated states.”

Playtech recently launched an exciting new live casino title: The Money Drop Live. The game is based on a very popular television series that has spread to networks all over the world, from Fox in the United States and Canada to Channel 4 in Great Britain.