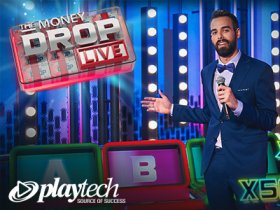 Playtech, one of the world’s leading providers of video slots and live dealer games for online casinos, has announced the launch of a brand new title in the company’s live casino portfolio: The Money Drop Live.

The game is based on a very popular television series, a brand that is owned by the Banijay Group and that has spread to networks all over the world, from Fox in the United States and Canada to Channel 4 in Great Britain.

The Money Drop Live is Playtech’s attempt to bring all the excitement from the television show into the live gaming world. The television show started out in the United Kingdom as “The Million Pound Drop”, and then it has been adapted for over 50 different countries.

This is not the first time that Playtech teams up with Banijay Brands to take a television show into the iGaming world, last year the two parties collaborated to launch Deal or No Deal – The Big Draw.

How The Game Unfolds

The Money Drop Live will start out with the live dealer spinning a wheel of chance, which will feature multipliers that can go up to at most 5,000x. If the wheel lands on any multiplier other than 8x, then the Drop Zones game is triggered.

This game is quite similar to the original television format, with players getting to choose how to split their money while chasing a big win. One of the four “drop zones” is safe, guaranteeing that the player will get a prize.

If the wheel lands on the 8x multiplier, then the players will get to enjoy the Quick Drop game. In this game the players must place all their money into one zone for a thrilling “all or nothing” gamble. There’s also the Card Clash bonus game that can be triggered, giving players the opportunity to earn great wins boosted by multipliers.

The Banijay Group has plenty of great game show formats in their catalogue, and since this live casino format is becoming more and more popular, we can expect more similar titles to come out from their collaboration with Playtech.

Lex Scott, Commercial Director of Gaming and Gambling at Banijay Brands, described The Money Drop as “a globally recognised brand” and added that Playtech’s live casino title will give players “a world-class live gaming experience.”

Kevin Kilminster, Head of Innovation at Playtech Live, added that The Money Drop Live is a title that promises to have everything: “an exciting, engaging format, a brand with international appeal”, plus the enjoyable gameplay experience that is typical for Playtech’s products.