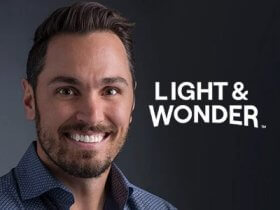 Light & Wonder, the gigantic American provider of gaming products and services, has announced the permanent appointment of Matt Wilson as the company’s new Chief Executive Officer and President.

Matt Wilson is not new to the job as he had been serving as interim Chief Executive Officer since August 2022, when Barry Cottle, the former President and CEO, resigned after over four years on the job.

Before taking the role on an interim basis, Matt Wilson was Executive Vice-President and Group Chief Executive of the company’s gaming business. The new permanent CEO will also become a member of the Light & Wonder board of directors.

After the appointment was made public, Matt Wilson declared himself “honored” by the trust of the company and added that he is “excited to work with the best team in the business” as the business “charts its cross-platform future.”

Jamie Odell, the Executive Chair of Light & Wonder, revealed that Matt Wilson was the unanimous choice of the board of directors because of his “impressive track record, extensive industry experience and his pivotal role in transforming our business.”

Jamie Odell added that the new permanent Chief Executive Officer “has demonstrated impressive leadership and strategic vision” and that “he fully embodies the Light & Wonder culture.”

At the same time, Light & Wonder also announced that the position of Chief Executive of the company’s gaming division, previously held by Matt Wilson, will be assumed by Siobhan Lane.

Lane was previously Senior Vice President and Chief Commercial Officer of gaming. Matt Wilson admitted that Siobhan Lane helped him in leading the gaming business of the company since having joined in 2020.

The double appointment comes at a very important moment for Light & Wonder as the company recently rebranded from Scientific Games and streamlined its business by selling its lottery division and its sports betting arm.

On the other hand, Light & Wonder completed the acquisition of ELK Studios, a creative games developer from Sweden. These moves highlight the company’s desire to focus on gaming services for both online and land-based casinos and gaming venues. Scientific Games started out as Autotote all the way back in 1917, and after several mergers it developed into today’s company, which is a world leader in the entertainment business.