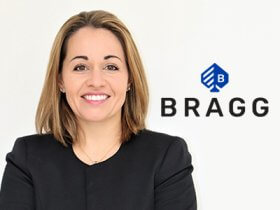 Lara Falzon joined the Bragg Gaming Group team in February 2021, when she was added to the company’s board of directors. Before joining Bragg Gaming Group, Lara Falzon was the Chief Financial Officer of NetEnt and had a key role in the landmark sale of that company to Evolution in 2020.

In 2021, Bragg Gaming was planning to get listed on the Nasdaq stock exchange, and that was one of Lara Falzon’s areas of expertise. In fact, the company did manage to get listed on Nasdaq by the end of 2021.

As President and Chief Operating Officer, Lara Falzon will be responsible for the oversight of the company’s day-to-day operational performance and she will also help guide the execution of the group’s growth-focused strategies.

As the appointment was made public, Lara Falzon declared that the company will continue to expand into new markets while delivering “consistent growth” and creating value for its shareholders.

The appointment was made after Bragg Gaming Group went through rather turbulent times in November 2021, when at the end of a strategic review the company’s Chief Executive Officer, Richard Carter, had to step down.

The company had reported “exceptional” revenue and growth over the past year and a half, but that was not reflected in the company’s performance on the public stock market. Paul Godfrey took on the Chief Executive Officer role at the time, but he holds the position on an interim basis, until a permanent replacement is appointed.