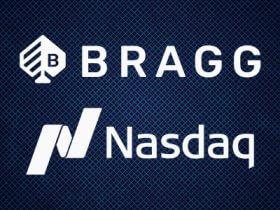 Bragg Gaming Group, the increasingly powerful iGaming content supplier from Canada, has reached one of its major goals for this year as it began trading its common shares on the Nasdaq Global Select Market.

The shares issued by Bragg Gaming Group are now trading on Nasdaq under the ticker symbol “BRAG” after the company secured the approval from the stock exchange last week. The Canadian supplier filed the application in March 2021 after having secured the approval of its shareholders for the listing.

Bragg Gaming Group will also continue to trade its shares on the Toronto Stock Exchange in Canada, where it will keep the same ticker symbol. The company’s expansion plans were made public shortly after having appointed Richard Carter as the new Chief Executive Officer.

Carter, the former CEO of SBTech, replaced Adam Arviv, the founder of Bragg Gaming, who took charge as interim Chief Executive Officer in September 2020 because the business was not performing to expectations at the time.

Bragg Expands Into Europe As Well

The company’s success in North America is replicated by its efforts in Europe. Earlier this week, ORYX Gaming, which is part of the Bragg Group, received local certification in the Netherlands for its iGaming Platform and RGS with fifty of its games to be made available on this market immediately.

The ORYX iGaming Platform is now fully compliant with the strict Dutch regulations and that will allow local partners to manage their entire product suite from one place.

The platform supplied by the Canadian provider features a proprietary set of tools including player and payments management, automated know-your-customer (KYC), compliance and promotions, along with fraud and risk management.

The starting point of the eagerly-awaited new regulated Dutch online gambling marketplace is October 1, and Bragg Gaming Group has great expectations from this territory as the potential seems immense. Bragg Gaming was founded in Toronto in 2004 and was initially named GiveMeSport. The company acquired ORYX Gaming in November 2020.