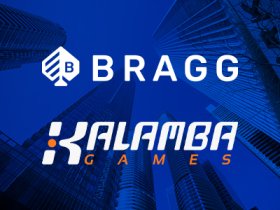 Kalamba Games, a well-established supplier of slot games for online casinos, has announced that it has gained entry into the competitive gaming market of the province of Ontario thanks to a partnership with Bragg Gaming, the Canadian business-to-business iGaming technology and content supplier.

The agreement between the two sides gives Kalamba Games a chance to distribute its content to operators that are licensed in Ontario through Bragg Gaming’s remote games server technology. The games from Kalamba will be distributed through two of Bragg Gaming’s divisions, Oryx Gaming and Spin Games.

Bragg Gaming Group has been given a supplier license in Ontario and the company has been distributing content to licensed operators in Ontario since the market opened in April, both games produced in-house and third-party titles.

The two companies already had an agreement to cooperate on other markets, but in June they decided to extend the partnership to include the booming North American markets.

In fact, the partnership between Kalamba Games and Oryx gaming dated all the way back to 2017, but since then Oryx was acquired by Bragg Gaming Group along with Spin Games.

Bragg Gaming Group has its headquarters in Toronto so the Ontario market is extremely important for the company. That is why the Canadian company has selected only a few content development studios to distribute in Ontario.

Andrew Crosby, Chief Commercial Officer at Kalamba Games, expressed his delight at expanding the existing relationship with Bragg Gaming Group. The executive added that the slots provided by his company are “unique and innovative” and that he is eager to see how players in Ontario will receive these titles.

Doug Fallon, Director of Content at Bragg Gaming Group, pointed out that the company’s strategy includes delivering “high quality and engaging titles” to operators through contracts with third-party studios.

The Bragg Gaming Group executive described Kalamba Games as a studio that has “fantastic reputation” thanks to their development of innovative game mechanics and also thanks to their “range of dynamic games”. Doug Fallon added that he expects players in Ontario to resonate with the titles offered by Kalamba Games.