Bragg Gaming And 888 Granted Licenses To Operate In Ontario 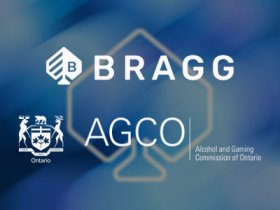 Bragg Gaming Group, the Canadian business-to-business iGaming technology and content supplier, and 888, the famous international online casino and sportsbook brand, announced that they were granted licenses to operate in Ontario, Canada’s most populous province.

Bragg Gaming, the Canadian group which also owns Oryx Gaming, Wild Gaming, Streak Gaming and Spin Games, has been granted a supplier license for Ontario. That means the company will be able to offer its online casino content and software solutions to the various operators that will be populating the Ontario market. The group has more than 5,000 games in its portfolio.

The company’s platform is already available in several jurisdictions like the United Kingdom, the Netherlands, Greece and Switzerland. Bragg Gaming announced that its goal for this year is to expand into New Jersey, Pennsylvania and Michigan by gaining licenses in those states.

The market in Ontario will be fully open to private operators from 4 April, but until then both suppliers and operators will have to undergo a licensing process. The liberalization of the gaming market in Ontario started in April 2019, when the province’s government announced plans to end the monopoly that was held by the Ontario Lottery and Gaming Corporation.

888 Joins The Competition In Ontario

888, the well-known international sportsbook and online casino brand, also announced that it secured an iGaming license to operate in Ontario. The license was issued by the Alcohol and Gaming Commission of Ontario, and it will give 888 the opportunity to offer customers in the region online casino games, sportsbook services and poker products as well.

888 now holds licenses in nineteen locally regulated markets, including seven states in the United States of America. Itai Pazner, the Chief Executive Officer of 888, revealed that Ontario represents “an attractive long-term growth opportunity for 888” and described the receival of the license as “a strategically important milestone” for the operator.

iGaming Ontario, the subsidiary of the Alcohol and Gaming Commission of Ontario, will be in charge of overseeing the market in the province. Several other operators have already been granted licenses to operate in the province, so the market will be extremely competitive.