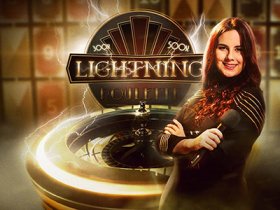 Evolution, the biggest global supplier of live dealer software and content, has announced it signed an exclusive agreement with Scientific Games to make Lightning Roulette available in land-based casinos.

Under the terms of this deal, Scientific Games will take Evolution’s award-winning Lightning Roulette live casino game and make it available as a showpiece physical game which can be installed in land-based casinos all over the world.

This will be a premiere for Evolution, its first game that will make the transition from online live streaming to a land-based setting. The reverse route has already been explored by the company as its Dual Play Roulette and Baccarat games are being streamed from land-based casino tables.

Lightning Roulette was launched in 2018 and it was an instant hit. The game received the Product Innovation of the Year Award at the Global Gaming Awards in Las Vegas and was also named “Game of the Year” at the EGR Awards.

Each round comes with “Lucky Number” wins, which offer players significantly boosted payouts. These special numbers are displayed in the form of lightning strikes that hit certain roulette slots for multiplied wins, making the game very spectacular from a visual point of view.

The Continuation Of A Long Relationship

These two companies have been working together for quite some time now, especially in the European, Canadian and American markets. In fact, the Scientific Games platform includes Evolution’s live casino portfolio, making it available to customers worldwide.

On the other hand, Evolution developed live casino versions of games that were initially created by Scientific Games, such as Three Card Poker, Ultimate Texas Hold ’Em and the Monopoly Live game show.

Todd Haushalter, Chief Product Officer at Evolution, described Lightning Roulette as “the biggest table game in online casino for years” and expressed his excitement at the prospect of having it featured in land-based venues through the machines designed by Scientific Games.

Rob Bone, Senior Vice President of Global Systems and Table Games at Scientific Games, added that the actual machines should be ready to be deployed in land-based casinos in 2022.