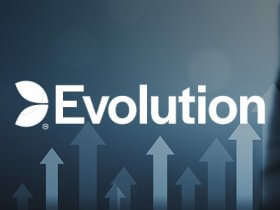 Evolution, the world’s biggest supplier of live casino software and content, has announced its financial results for the second quarter of 2022 and the numbers show an increase in revenue of 34 percent compared to the same period of last year.

The live casino vertical was responsible for most of the financial growth. The company’s revenue from this segment grew 36.7 percent year-on-year to a total of 278.5 million euros. Meanwhile, revenue from random number generator (RNG) games only grew 6.1 percent to 65.5 million euros.

However, Martin Carlesund, the Chief Executive Officer of Evolution, revealed that the company expects “double-digit growth” from its RNG games business in the near future and revealed that he is “pleased with the development” of the company’s RNG segment in the second quarter of 2022.

Evolution’s increased focus on RNG is proven by last month’s acquisition of slot developer Nolimit City for a price of 340 million euros. Nolimit City became the fourth slot games brand in Evolution’s portfolio after the acquisitions of NetEnt, which already owned Red Tiger, and Big Time Gaming, the Australian developer that came up with the extremely popular Megaways game mechanic.

When asked about the company’s earnings before interest, taxes, depreciation, and amortization (EBITDA) in the second quarter of 2022, CEO Martin Carlesund declared himself “happy but not content”. In fact, the company had a 69.3 percent EBITDA margin in the second quarter, which represents an increase of 34 percent year-on-year.

However, the first six months of 2022 brought a profit of 398.6 million euros for Evolution, and that figure represents a significant increase compared to the 276.4 million that were generated in the first half of 2021.

The company’s operating expenses also increased to 129.4 million euros in the second quarter of 2022, which Evolution attributed to increased personnel as the developer launched new tables and expanded to new markets.