Evolution Agrees To Acquire Nolimit City For Over 300 Million Euros 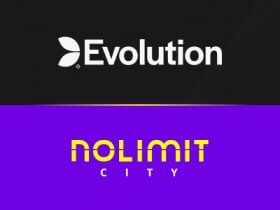 Evolution, the world’s biggest supplier of live casino software and content, has announced that its expansion on the global iGaming market will continue with the acquisition of Nolimit City, an up and coming provider of slot games.

After this deal is complete, Nolimit City will become the fourth slot games brand in Evolution’s portfolio. The Swedish company made its first step on this path in 2020 when it acquired NetEnt, which already owned Red Tiger. Moreover, last year Evolution went on to acquire Big Time Gaming, the Australian developer that came up with the extremely popular Megaways game mechanic.

Nolimit City has had pretty good financial numbers lately, and in 2022 the studio expects revenue of 30 million dollars while its earnings before interest, tax, depreciation and amortization are expected to be around 23 million euros.

The World’s Number One Provider

The Evolution board issued a statement about the acquisition, declaring it in line with the company’s strategy “of being the world’s number one provider of online casino games, supplying its customers with the best gaming content.”

Jens von Bahr, the chairman of Evolution’s board of directors, revealed that one of the key aspects that led to the acquisition of Nolimit City was the studio’s impressive level of innovation.

“With the addition of Nolimit City to the Evolution family we extend our portfolio of truly innovative and cutting edge games from the top brands and game makers in the industry,” Jens von Bahr added.

Jonas Tegman, the co-founder of Nolimit City, added that the two companies are “fully aligned in terms of people, product, technology and how to get the job done.” Tegman added that at the moment the entire slot games vertical is going through “massive change” and that the challenges ahead will be better faced together with Evolution. The acquisition will be completed after regulatory approvals are cleared, most likely inthe third quarter of 2022.

The live casino provider continued to do well recently, reporting a significant revenue increase in the first quarter of 2022. Evolution generated 326.8 million euros in revenue in the first three months of 2022, a figure which represents an increase of 38.6 percent compared to the same period of last year.

SOURCE: “Evolution has entered into an agreement to acquire Nolimit City, a leading producer and developer of online slot games“. Nolimit City. June 22, 2022.