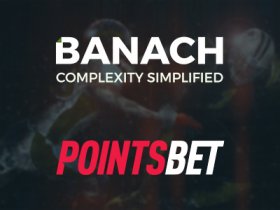 PointsBet, the successful global online bookmaker based in Australia, has reached an agreement to purchase Banach Technology Limited through its Irish subsidiary called Lockspell Limited.

Banach Technology currently provides its services to several of the world’s biggest sports book operators, and for PointsBet the acquisition is another step in their strategy to conquer the United States market. The purchase is believed to be worth around 43 million dollars.

The technology developed by Banach stands out through its highly sophisticated risk management algorithms and deep trading experience, and that is what determined PointsBet to purchase the business.

Sam Swanell, Chief Executive Officer and Managing Director of PointsBet, revealed that the technology and employees from Banach will help the Australian company develop its in-play betting offering.

Acquiring a company with experience in this field was the best way to move forward for PointsBet as they also considered developing proprietary technology in-house. The PointsBet Chief Executive Officer added that this move will allow the company to “continue to control its destiny.”

Mark Hughes, the Chief Executive Officer of Banach, said that himself and his team were excited to become a part of a “forward-thinking global organisation,” and revealed that they will contribute to PointsBet’s pre-game, in-play and free-to-play offering in the United States. Hughes will now become a Chief Operating Officer at PointsBet.

PointsBet is currently licensed to provide online sports betting services in the American states of Indiana, Michigan, Illinois, Iowa, Colorado and New Jersey, with Virginia and Tennessee expected to be added to the list shortly.

The Australian company established its subsidiary in the United States in 2018, immediately after the U.S. Supreme Court invalidated the Professional and Amateur Sports Protection Act, which prohibited sports betting.

Last year, PointsBet raised over 150 million Australian dollars through a retail entitlement process in order to fund their expansion on the United States gambling market.

Most of that money came from the company’s business in Australia, but the U.S. turnover also recorded a significant rise, going up by no less than 335.1% to 819 million dollars.