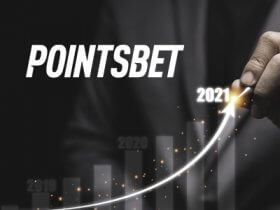 PointsBet, the global online bookmaker based in Australia, has recorded impressive results in the first half of the 2020-2021 fiscal year as revenues and turnover grew rapidly.

However, the company did spend big amounts of money on advertising and also invested heavily in research and development, and those aspects did have a negative effect on the bottom line.

The Australian company is very optimistic about its January results after having managed to kick off an online sportsbook in Michigan, following successful launches in Colorado, New Jersey, Iowa, Indiana and Illinois.

For the first half of the year, PointsBet recorded a turnover of 1.89 billion Australian dollars, which represents a huge 254.5% increase compared to the 2019-2020 fiscal year.

Business in Australia made up the bulk of this impressive total, contributing $1.07bn. The company also recorded a big increase in U.S. turnover, that went up by 335.1% to 819 million dollars.

PointsBet’s gross win margin was 8.9%, resulting in gross revenue of $153.8m. That figure represents a staggering year-on-year improvement of more than 460%. Most of that came from Australia, but the company’s U.S. gross win recorded a 580% growth compared to the previous year.

The company did spend a lot as well, though, and the outgoings outpaced revenue in the first half of the fiscal year. Advertising and marketing costs were the largest expense, worth $71.8m, while research and development costs were around 48 million dollars. This resulted in a loss of $48.8m, up 51.1% from the previous year.

Despite the loss, the company believes in its future as it continues to expand into new markets, especially in the United States. Moreover, in January PointsBet decided to appoint basketball legend Shaquille O’Neal as a brand ambassador in Australia.

Shaquille O’Neal will feature in the company’s marketing campaign in Australia, which will run on all available platforms, from classic television to social media and digital products.

The legendary basketball player had an impressive career at six NBA teams, winning three Championships with the Los Angeles Lakers and another title with the Miami Heat.

About his partnership with PointsBet, Shaquille O’Neal said: “The rise of responsible sports betting is really exciting, and I am so excited to join forces with PointsBet, the best-in-class partner in Australia when it comes to online sportsbooks.”

Andrew Fahey, PointsBet’s chief marketing officer and co-founder, added: “Shaq is an iconic figure in the worlds of sports and entertainment and was our clear number one pick to represent the PointsBet brand in Australia.

U.S. sports, particularly professional basketball, continue to be the fastest-growing betting sport in Australia, and we are very excited to align with such a transcendent athlete.”