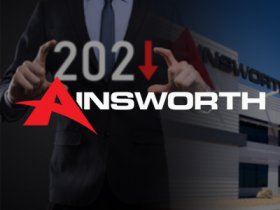 Ainsworth Game Technology, the well-known Australian gaming equipment manufacturer, has reported a loss before tax of 59.2 million Australian dollars for the 2020-2021 financial year, which ended on 30 June.

However, the second half of the fiscal year has shown good signs for the Australian company as it lost just 2.6 million dollars during the last six months before 30 June. Nevertheless, the full year results show a loss which increased from 43 million dollars in 2020 to just over 59 million in 2021, mainly due to the poor performance recorded in the first half of the fiscal year.

On the bright side, the company’s revenue increased by 7 percent compared to the previous year to 159.5 million Australian dollars. Ainsworth Game Technology experienced increased revenues in North America and Australia, but also had a pretty big decline in Latin America.

The Australian company revealed that one-off items and currency translation impacts affected the bottom line quite heavily, without those the result would have been a loss of just 17.1 million dollars for the full year. Moreover, the second half of the fiscal year would have ended with a profit of 1.6 million Australian dollars.

The biggest share of the group’s revenue came from international markets, which contributed 76 percent of the total revenue for the year. Revenue from North American markets increased by 23 percent compared to last year.

The company’s performance in the Australian region was even better, it recorded a 38 percent increase in revenue year-on-year and also had an EBITDA of 5.4 million Australian dollars. Moreover, those good results were recorded despite constant uncertainties across Australia due to COVID-10 lockdowns in Victoria and New South Wales.

Ainsworth also reported a 28 percent increase in online revenue to 5.9 million Australian dollars after launching real money gaming in New Jersey in April 2020. In August, the Australian company signed a partnership agreement with Caesars Entertainment to supply its games to CaesarsCasino.com, HarrahsCasino.com, and WSOP.com, online casinos that the American operator is running in the state of New Jersey.