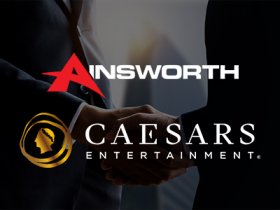 The deal’s aim is to bring the world-class video slots developed by Ainsworth Game Technology into the offering of CaesarsCasino.com, HarrahsCasino.com, and WSOP.com, online casinos that Caesars Entertainment is operating in the state of New Jersey.

The most popular games from Ainsworth’s rich portfolio have already been added to the offering of the online casinos that are operated by Caesars Entertainment, but the agreement between the two sides stipulates that additional games from the developer will be added to the websites on a regular basis.

Jason Lim, the General Manager of the Online division at Ainsworth, revealed that his team is “thrilled” to have the chance to showcase its games on the websites that are run by “a prestigious operator like Caesars.”

Caesars Entertainment is an American company that operates several land-based and online casinos, along with multiple golf courses and resorts. The company has great tradition as it was founded all the way back in 1934 in Reno, Nevada.

In 2013, Caesars Entertainment was the fourth-largest gaming company in the entire world, with annual revenues of over 8.5 billion dollars. In 2020, the company was acquired by Eldorado Resorts in a deal worth over 17 billion dollars.

Ainsworth Expects Profits For Second Half Of Fiscal Year

The Australian company seems to be slowly recovering from the effects of the novel coronavirus pandemic. Ainsworth Game Technology announced that it expects to record a profit of around 1.6 million Australian dollars for the second half of the 2021 fiscal year.

For this period, the company estimates that revenue will be around 88 million dollars, which would represent an increase of 22 percent compared to the same period of the previous year. Earnings before interest, taxes, depreciation, and amortization (EBITDA) should be around 14.4 million Australian dollars for the first half of FY21.

These results represent a big breath of fresh air for Ainsworth as the company recorded losses of around 14 million Australian dollars in the first half of the 2021 fiscal year. Moreover, the 2020 fiscal year produced losses of approximately 31.5 million dollars for the Australian company.