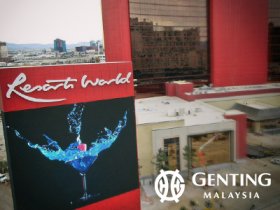 Genting Malaysia Berhad, the global leisure and hospitality company, has announced that its Resorts World Las Vegas venue will be officially opened on June 24, after more than six years of work.

The Nevada resort will span across 87 acres and it will include three hotels with a total of around 3,500 rooms, along with a huge casino of 117,000 square feet. The land-based casino will feature a wide range of slots and table games, along with a dedicated poker room and a sportsbook.

However, the difficulties generated by the novel coronavirus pandemic will make this a partial inauguration. Genting Malaysia Berhad had to postpone the opening of two venues in this resort: a concert hall with 5,000 seats and a meeting and banqueting space that has around 250,000 square feet. These two parts of the resort will most likely be completed this autumn.

Moreover, the fully-electrified underground transit system that was designed to take visitors from one part of the resort to another will most likely be operational in the second part of the year. The transit system will also connect the venue to the Las Vegas Convention Center.

A Long Wait Before The Grand Opening

Planning for Resorts World Las Vegas began all the way back in March 2007, when Boyd Gaming Corporation decided to demolish Stardust Resort and Casino, a 32-story hotel and gambling venue, to make way for a new project named Echelon, worth almost 5 billion dollars.

The timing of the move was not great, though, the global credit crisis struck in 2007-2008 and the American company postponed its plans and later sold the site to Genting Malaysia Berhad for 350 million dollars in 2013.

The Malaysian company started construction in May 2015, proclaiming that Resorts World Las Vegas will be the first such venue to be opened in the bustling Nevada metropolis in more than a decade. It is believed that Lim Kok Thay, the billionaire chairman of the Genting Group, checked in regularly to assess the progress of the project.

Resorts World Las Vegas will employ around 5,000 people and cost around 4,3 billion dollars to build. The company revealed that it received around 100,000 applications for jobs at Resort World.

Genting Group also plans to expand into the Northern side of the United States with a new gambling hall that would find its place in Newburgh Mall. Genting already operates a casino in the state of New York, the venue is called Resorts World Catskills and it is located in Sullivan County.