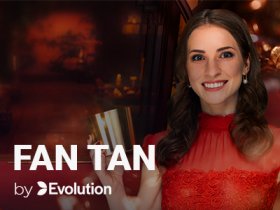 Evolution, the world’s leading provider of live casino solutions, has announced it boosted its portfolio of live dealer games with a new exciting title: Fan Tan, a product that is based on a traditional Asian bead game.

Fan Tan appeared in China and its origins date back to the first century, approximately 1640 years ago. The game is, at least in theory, quite similar to the well-known roulette, because its outcome is based on pure chance.

Moreover, Fan Tan was among the most popular games played in the bustling casinos of Macau. The game is based on the repeated division of beads and it can be quite entertaining once you get the hang of it.

In Evolution’s live casino version, the player will initially see the beads covered by a glass dome. Then the dealer will use a metal cup called “tan koi” to separate out a random number of beads. After that phase is done, the dealer will proceed to sort the selected beads into lines of four, using a specially designed bamboo stick.

That process continues until a final line of beads remains, and those beads will be placed right in the middle of the table. The players will have to predict the number of beads that remain in that final line, and that decides the outcome of the game.

Todd Haushalter, Chief Product Officer at Evolution, revealed his respect for this ancient game and explained the company’s desire to release a fresh and modern version of it for today’s gamers. The Evolution representative added that the company’s aim is to “introduce the game to a whole new generation of players” and described it “a great way to entertain Baccarat players when they are looking for an alternative to their main game.”

Evolution, which has its games featured in the offering of several casinos in Malaysia, is the current market leader when it comes to live casino services and content. The company has already received several awards for its successful live dealer titles, and in 2020 it completed a billion-dollar acquisition of another casino software giant, NetEnt.

The company’s portfolio of live dealer games is quite impressive, ranging from the very popular Instant Roulette and several versions of Blackjack and Baccarat to lavish game shows such as Crazy Time and Dream Catcher.

There are currently over 4,000 people working for Evolution in the several offices and studios that they operate in Latvia, Canada and the United Kingdom. The company provides live casino services to over 100 operators at the moment, both online and at physical locations.