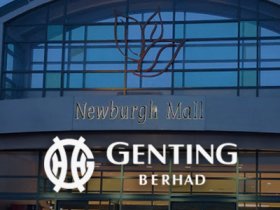 Genting Group, the Malaysia-based casino operator, has revealed its plans to expand into the United States with a new gambling hall that would find its place in Newburgh Mall.

The location is excellent for Genting’s purpose as it sits between two interstate highways and it’s just 20 minutes away from Harriman, New York, where the company initially wanted to set up the new gambling venue.

Genting already operates a casino in the state of New York, the venue is called Resorts World Catskills and it is located in Sullivan County. The authorities in Orange County allowed Resorts World to deploy electronic slot machines in the area in 2019, and those machines were previously licensed at Monticello Raceway in Sullivan.

The company issued a press statement, saying: “Developing a video gaming machine facility in Orange County has, for many years, been part of Resorts World’s long-term vision for Hudson Valley and the Catskills. It will create hundreds of good-paying unions jobs, generate significant revenue for New York’s public schools, and is an important step in ensuring the long-term sustainability of Resorts World Catskills.”

It is still unclear how many machines Genting would set up at its new gambling site in Newburgh. The company will have to present its plans to the Newburgh Town Board at a meeting on February 22.

The Newburgh gambling hall that Genting proposes is expected to employ up to 225 people. The venue would take around a year to build, but the company will have to get approvals from the state Gaming Commission before making it operational.

Genting Group Determined to Expand in the United States

Genting Malaysia is one of the most important leisure and hospitality companies in the world, and it also has a subsidiary in New York. So far, the company based in Malaysia has invested 535 million dollars in Genting New York and will most likely have to support its subsidiary with even more funds in the near future.

Moreover, Genting Group plans to open a brand-new casino in Las Vegas this year, and the New York property is set to serve as a key feeder to this investment, which is expected to be a significant one of around 4 billion U.S. dollars.

Genting Group was founded in 1965 and it currently operates destination resorts in Malaysia, Singapore, the Philippines, South Korea, the United Kingdom, the Bahamas, the United States.