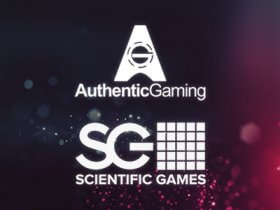 Scientific Games Corporation, the famous American provider of gambling products and services, has announced it acquired Authentic Gaming, one of the most popular providers of live casino software and content.

This is the first step for Scientific Games into the live dealer games industry, a segment which is estimated to represent around 30 percent of the whole iGaming market. Authentic Gaming is one of the most prominent live casino providers in Europe, it started out in 2015 with just three employees but now it has a rich portfolio and a vast network of business-to-business customers.

The acquisition of Authentic Gaming is an important part of a bigger plan for Scientific Games as the American corporation is trying to diversify its portfolio while trying to expand its market share, especially in the United States.

Earlier this year, Scientific Games Corporation secured another acquisition from overseas as they bought Lightning Box, an innovative Australian slot developer. At the time, Scientific Games revealed that the purchase was a part of its strategic plan to make the company become a content-led business.

Dylan Slaney, the Chief Executive Officer for iGaming at Scientific Games Corporation, said that the acquisition makes his company become “uniquely positioned” to take advantage of the convergence of live and digital gaming.

On the other hand, Barry Cottle, the Chief Executive Officer of Scientific Games Corporation, revealed that the content from Authentic Gaming, combined with the American company’s OpenGaming platform, should allow the business to “capitalise on a growing U.S. market opportunity.

Authentic Gaming had a strong presence on the European market, but the provider did develop interesting products for other territories as well. Earlier this year, Authentic Gaming launched a special product for the Indian market: Cricket Live Roulette, the world’s first-ever cricket-themed live casino title.

Cricket Live Roulette has been developed especially for the fans of this sport, featuring a live scoreboard behind the game table in order to keep the players up to date with the action and scores from the Indian Premier League and other cricket events.

The game is fully compatible with mobile devices and has received a fea updates and enhancements since its launch. Cricket Live Roulette was designed by Authentic Gaming exclusively for Betway, as the operator requested a product that could attract cricket fans to their live dealer tables.