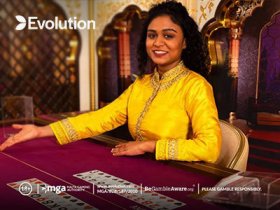 Evolution, the world’s most important provider of live casino software and content, has announced the launch of Super Andar Bahar, a new version of the well-known classic Indian card game.

The new unique online game proposes a fresh take on the traditional Indian card game, making it more exciting with engaging side bets and payouts that can be multiplied up to 4,000x.

In Super Andar Bahar, the main game takes place pretty much as usual, with players having to predict which side of the table, Andar or Bahar, will have a dealt card matching the Joker or “house card”.

That’s how the game has been played for hundreds of years in India and its simplicity has made it a legend worldwide. However, Evolution’s latest version adds ten optional side bets, which are very easy to understand and access.

The side bets have the aim of predicting when the matching card will be dealt, offering potential wins which are boosted by massive multipliers. In fact, between one and five random multipliers can be applied to a side bet in each round.

About this new game, Todd Haushalter, Chief Product Officer at Evolution, said that it is “a super-special version” of Andar Bahar, a legendary game that can only get better thanks to the high multipliers. In fact, Haushalter expressed his belief that the multipliers were “missing” from the original version of the game, and their addition should make the product a lot more entertaining and engaging.

Last but not least, Todd Haushalter revealed one of the next products that Evolution is going to launch later this year: Teen Patti, another title that is based on an ancient Indian game.

Evolution recently released its financial data for the first quarter of 2022 and the figures are looking great, with revenues going up 38.6 year-on-year to 326.8 million euros.

Most of the company’s revenue came from live dealer games as sales continued to grow rapidly. In fact, revenue from live casino titles amounted to 264.5 million euros, 44.3 percent higher than in the first quarter of 2021.

Moreover, the figure recorded in the first quarter of 2022 is more than double than what the company’s live dealer games produced in the similar period of 2020.