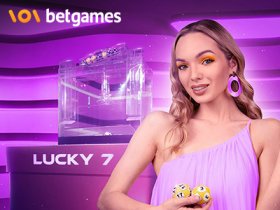 BetGames.TV, one of the world’s most active providers of live dealer games, has released a new and improved version of Lucky 7, the lottery game that has gained a lot of popularity in recent years.

The new version of the game has a fresh look, pictures that will impress with their full-HD quality, new graphical balls, improved security and enhanced player experience thanks to a few other new features.

Lucky 7 is a lottery-based live game, in which 7 winning balls are randomly drawn out of 42. Every betting round lasts about 4 minutes, with the lovely presenters announcing each phase of the game.

The game also offers significant prizes. If a player correctly guesses four out of the seven winning balls, then he or she will receive a payout worth 2,000 times the stake. The bet slip is always visible below the video, and even the bet history is easily accessible.

The relaunch of Lucky 7 is part of a series of improvements that BetGames.TV has made to its lotto games suite. The company has already launched revamped versions of Lucky 5 and Lucky 6, and the relaunches were made possible after BetGames.TV redesigned and rebuilt its Lucky Lottery studios, which now have a more modern look and feel, along with new features, improved security and technical advances.

Time For A Rebrand

At the same time, BetGames.TV has decided to choose a new identity for the company. The name has been stripped down to the simpler “BetGames”, while the supplier’s website has also been completely redesigned.

BetGames aims to become one of the world’s leading developers of live dealer betting products after having set up a brand new development hub in Malta to complement the activity of its employees in the headquarters in Vilnius, Lithuania.

Andreas Köberl, the Chief Executive Officer of BetGames, declared that his target is to make the company become a “true bridge between sports betting and live casino for tier-one operators worldwide.” The company was established in 2012 and it currently offers 12 live dealer games, which are broadcast from the company’s studios in Malta and Lithuania to customers in over 40 countries around the world.