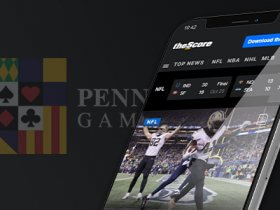 Penn National Gaming, the American land-based casino and racetrack operator, has announced that it completed the acquisition of theScore, a top Canadian company that has become one of the leading sports gaming content suppliers in North America.

The deal is worth 2 billion dollars, Penn National Gaming will pay 17 dollars in cash and 0.2398 shares, which are worth 17 dollars each, for a total amount of 34 dollars per share. This means that theScore shareholders will eventually have a 7 percent stake in the new combined business, while Penn shareholders will retain the remaining 93 percent.

Penn National Gaming also announced that it will migrate its own betting products to a brand new platform that is being built by theScore. The acquisition received approval from theScore shareholders and from the Canadian government and it was completed much earlier than anticipated, initially the deal was set to close in the first quarter of 2022.

For the first half of the 2020-2021 financial year, theScore reported a record handle of 137.4 million Canadian dollars. Compared to the previous year’s results, the handle went up by no less than 491 percent.

After having completed the acquisition, Jay Snowden, President and Chief Executive Officer of Penn National Gaming, revealed that his company is looking forward to “entering the Canadian gaming market, which represents a compelling new opportunity”.

In fact, Canada first allowed legal betting on single sporting events in August, after Bill C-218 was signed into law in July. John Levy, chairman and Chief Executive Officer of theScore, was one of the main advocates for the new bill as he urged Parliament to approve it as soon as possible.

“It is a truly exciting time to join Penn National and collaborate with their team to build a highly innovative and first-of-its-kind sports media and gaming company,” John Levy said. The chairman added that the combined business will be ready to launch new products in Ontario as the province is expected to open sports betting and iGaming to private operators later this year.