theScore Reports Record Handle for First Half of Fiscal Year 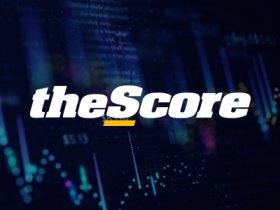 theScore, the Canadian company that has become one of the leading sports gaming content suppliers in North America, has reported a record handle of 137.4 million Canadian dollars for the first half of its financial year.

The second quarter of the 2020-2021 fiscal year had quite impressive results, with a handle of 81.6 million Canadian dollars. The comparison to last year’s results gives a better understanding of just how good the three months to 28 February 2021 were for theScore. In fact, the handle went up by no less than 491% compared to the same period of last year.

The company had significant operating costs, which led to the overall loss of 25 million dollars. The recorded costs were 39.2 million dollars, with 6 million spent on developing new products. Score Media and Gaming Incorporated is based in Toronto, but owns and operates digital sports media and sports betting products both in Canada and the United States.

In February, Score Media and Gaming launched theScore Bet in Iowa, extending the reach of the company’s mobile sports betting platform to four American states. theScore was already operating in New Jersey, Colorado and Indiana, and it is preparing for the much-anticipated legalization of single-event betting in Canada.

In fact, theScore Chairman and Chief Executive Officer John Levy was invited to submit his opinion in support of the new bill that would legalize single-event betting in Canada. In his address to the House of Commons, Levy urged the representatives to pass the bill “as quickly as possible.”

The International Betting Integrity Association (IBIA) has also backed the legalization of single-event sports betting in Canada and submitted its opinion to the House of Commons Standing Committee on Justice and Human Rights.