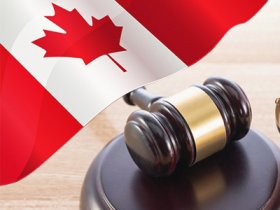 Canada’s single-event sports betting bill passed on Tuesday, opening the way to legalize betting on single games or sporting events in all provinces of the country. The bill will now have to receive royal assent from the chief justice of the Supreme Court and then each of Canada’s provinces and territories will get to decide how to implement regulated and legal betting on sports events.

The now famous Bill C-218 was introduced by Senator Kevin Waugh and received the backing of the Canadian government. The bill’s purpose is to amend a section of the Criminal Code of Canada, which currently doesn’t allow wagering on single sports events. The only way the bet legally is to wager on three or more events at once.

The second reading of the bill was back in February, when both the British Columbia Lottery Corporation and the Alberta Gaming, Liquor & Cannabis revealed their full support for the proposal. In April, the bill was approved by the House of Commons.

Senator David Wells began the third reading of the bill at the beginning of this week, and underlined some hard facts: Canadians are spending around 14 billion dollars per year on single-event sports betting, placing their bets on offshore gambling sites. The senator pointed out that there are no taxes collected on those revenues, and the government is also in no position to impose any regulations on the activities. According to Senator David Wells, if the bill passes then Canada’s provincial governments will be able to “bring single-event sports betting within Canada”.

Other senators raised concerns regarding the prospect of match fixing, a temptation that could increase once single-event betting is allowed in the country. Senator Peter Harder said that the legislator should “take a more proactive stance regarding match manipulation.” The senator added that the bill should not pass unless it also addresses the issue of match manipulation.

In fact, an amendment to the bill was proposed in order to help address the integrity concerns. Under this amendment, a person would be deemed to have committed an offence if they cheat at gambling or assist another person in doing so.

Moreover, the amendment clarifies that if a person does cheat, it doesn’t matter if they win or improve their chances of winning. In this amendment, cheating is defined as any interference with the gambling process and it would be an indictable offence which would be punishable by up to two years in prison.