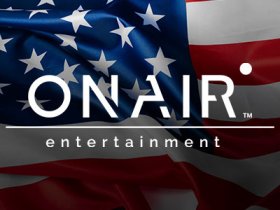 On Air Entertainment, one of the fastest-growing suppliers in the live dealer games industry, has announced that it is going to double its global footprint in 2023 as it will launch its live casino games in the United States of America.

The company’s content is currently live in nine regulated markets and that is quite impressive considering that the business launched just eight months ago. The supplier is currently offering its live casino products in the United Kingdom, the Netherlands, Denmark, Sweden, the Isle of Man, the United Kingdom, Greece, Ontario, Latvia and Malta, and plans to expand to more territories in the near future. Meanwhile, the supplier’s portfolio has recently expanded with the launch of AutoRoulette.

Simon Field, Chief Commercial Officer at OnAir Entertainment, revealed that the company’s next target is the United States market, where it will launch products specifically designed for the audience in the region.

The Chief Commercial Officer praised the company’s portfolio of live casino games, stating that they have delivered record results for the online casinos which entered partnerships with OnAir Entertainment.

The executive also added that the supplier has prepared “a roadmap of classic, US market specific, state-of-the-art content that no other supplier in the industry can match.” Moreover, Simon Field declared himself confident regarding the company’s success in the United States, especially since its live casino content delivered “exceptional performance in Ontario.”

New Kid On The Block

OnAir is one of the newest suppliers to enter the highly competitive live casino market, but the team leading the company has plenty of experience in the field. Andres Rengifo, the Chief Executive Officer of OnAir Entertainment, has previously worked at Evolution, the biggest name in the industry, as Head of International Operations.

Moreover, Simon Field, the Chief Commercial Officer of OnAir Entertainment, has previously held a similar position at NetEnt, the content supplier that was acquired by Evolution in 2021. The company also has Oliver Reid, a former Chief Operating Officer for Authentic Gaming, as Managing Director for North America.

“The team is perfectly positioned to lead the US live casino market with world-class solutions, content and experience of successful multi-studio and innovative game rollouts for the world’s biggest brands in US regulated markets and we can’t wait to execute our strategy,” Oliver Reid said.