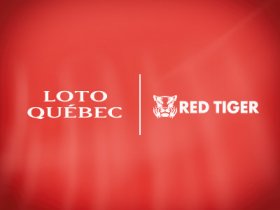 Loto-Québec, the provincial lottery and gambling operator headquartered in Montreal, has announced that it signed a partnership with Red Tiger, one of the most prominent suppliers of slot games for online casinos.

Under the terms of the agreement, Loto-Québec will be able to offer its customers extremely popular titles such as Primate King, Cash Volt, Piggy Riches Megaways and Gonzo’s Quest Megaways. Moreover, the provincial operator will also have access to the various jackpots offered by Red Tiger: hourly, daily and progressive.

Loto-Québec was founded all the way back in 1969 by the Québec Government, aiming to provide lottery games for customers in Canada’s French-speaking province. The company has constantly developed and now it also offers online casino entertainment to its customers.

Jeff Millar, Commercial Director for North America at Evolution, spoke about the new agreement with Loto-Québec and revealed that his company was thrilled to be chosen as a partner. ”We’re excited to build on this relationship and hope that this is just the beginning of a long and fruitful partnership,” Millar added.

In addition to the agreement with Red Tiger, Loto-Québec also signed a landmark deal with Evolution for the supply of four of the provider’s Dual Play tables to Casino Montreal, Loto-Québec’s flagship casino.

The two parties already had an agreement to supply live casino games for the online platform operated by the government company, and now that deal was extended to allow the state-owned operator to host the provider’s innovative tables at its land-based property.

Dual Play is an interesting crossover between online live casino gaming and land-based action. The tables give both online and in-person players the possibility to participate in the games simultaneously, with the action being streamed right from the land-based casino floor.

Initially, the Canadian corporation offered six dedicated live casino tables from Evolution, and five of them had French-speaking dealers. The games were broadcast from Evolution’s live casino studio located in Vancouver.