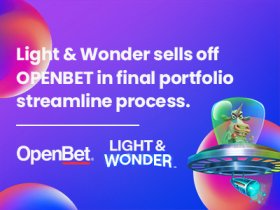 Light & Wonder, the gigantic American provider of gaming products and services formerly known as Scientific Games, has announced that it has reached an agreement to sell OpenBet to Endeavor, a global sports and entertainment company.

Initially the American company wanted to receive 1.2 billion dollars for OpenBet, one of the world’s leading global online sports betting technology companies. In fact, the OpenBet platform is used by the largest operators around the world, including top Canadian operators such as British Columbia Lottery Corporation, Loto-Quebec and the Atlantic Lottery Corporation. At the moment, OpenBet has over 75 global customers and proudly holds a 100 percent uptime record across major sporting events.

The transaction is expected to close by the end of the third quarter of this year, subject to the regulatory approvals and customary closing conditions. Light & Wonder recently sold its Lottery business, and together with the sale of OpenBet is expected to generate around 5.6 billion dollars in net after-tax proceeds after these deals.

Barry Cottle, President and Chief Executive Officer of Light & Wonder revealed that the sale of OpenBet allows the company “to further de-lever its balance sheet” and achieve the net debt leverage ratio that it wants, between 2.5x and 3.5x.

New Focus And A New Name

The process of streamlining the business comes after the American company decided to switch its focus to gaming services. That also led to changing the name of the company from Scientific Games to Light & Wonder.

On the other hand, Light & Wonder went on to acquire several slot developers from around the world in order to boost its portfolio and its capacity to produce new casino games.