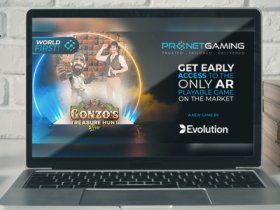 Pronet Gaming, the international provider of sportsbook, casino, and retail solutions for the iGaming market, has announced that it will be one of the first suppliers to release Evolution’s Gonzo’s Treasure Hunt, a live casino game that will most likely open new roads for this vertical in the future.

The agreement between tge two will see the supplier get access to this groundbreaking game three weeks ahead of its general release. Pronet’s business clients will be able to offer their customers the world’s first live casino game that brings together live and slots-style gameplay.

Moreover, Gonzo’s Treasure Hunt is the first ever live casino game to utilise augmented reality technology. The game was inspired by the famous Gonzo character , which was developed by slot manufacturer NetEnt.

Evolution acquired NetNet for 2.3 billion dollars last year, and Gonzo’s Treasure Hunt is the first high-profile live casino product that has come out after this big merger.

The main feature of the game is the search for hidden treasures in a huge wall composed of 70 stones, much like in a video slot. In fact, that mechanic will most likely be quite familiar to fans of the Gonzo slots. However, those fans will surely be surprised to see their favourite explorer come to life as an augmented reality character and join the live show hosts and players as they have fun searching for treasures.

A Fresh Take On A Popular Concept

Speaking about Evolution’s new live casino product, Bobby Longhurst, the Chief Commercial Officer of Pronet Gaming, described it as “a fresh take on a popular concept that widens the definition of both live and slots.”

The Pronet Gaming representative added that Gonzo’s Treasure Hunt will give the player full control over the in-game journey, and that aspect alone will most likely make this title “a big hit”. Pronet Gaming offers its business customers more than 6000 casino games, including slots and live dealer titles from leading providers.

Evolution is the global market leader when it comes to providing B2B live casino services. The Swedish company currently employs over 4,000 people in several offices and studios located in Latvia, Canada and the United Kingdom. They provide live casino services to over 100 operators worldwide, both online and at land-based casinos.