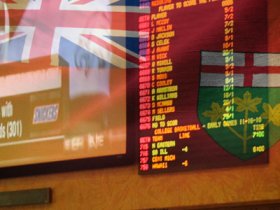 The Ontario Lottery and Gaming Corporation, the government-owned lottery and casino operator from Canada’s most populous province, has announced that its brand new sports betting service has accepted more than 6 million dollars in bets during the first four weeks of operations.

The Ontario Lottery and Gaming Corporation launched its Proline+ online betting service on August 27, the date which marked the beginning of legal single-event sports betting across Canada. Proline+ offers people in Ontario the chance to make a legal bet on a single event for the first time ever in the Canadian province following the approval of the famous federal Bill C-218.

The impressive first-month results prove, according to the Ontario Lottery and Gaming Corporation, “that Ontario bettors have been eagerly awaiting a trustworthy option to lay down their bets.” David Pridmore, Chief Digital and Strategy Officer at the Ontario Lottery and Gaming Corporation, announced that his company is expecting even better results in the coming months as more sports and leagues kick off their new seasons.

The Ontario Lottery and Gaming Corporation added that 77 percent of all wagers recorded during the past four weeks were single-event bets. Moreover, the company conducted a survey among its customers and interviewed around 1,000 people about their opinions on the legalization of single-event betting and on betting on sports in general.

That survey found that 62 percent of the people who responded said they are now more likely to make a single-event sports bet after it became fully legal across Canada.

The survey also revealed that most people believe that betting on a sports event makes the whole experience more fun and enjoyable, especially since the novel coronavirus pandemic has added attendance restrictions to sports events.

Around 24 percent of those surveyed said they will attend more sports games in the next year than before the pandemic. A further 27 percent of those who took part in the survey said betting on their favorite team during the pandemic helped offset the fact that they were unable to attend the games in person.

The survey also revealed that just under half of Ontario’s sports bettors place a bet at least once a month. The data also shows that a growing number of women are betting, with females making up around a third of sports bettors in the province of Ontario.