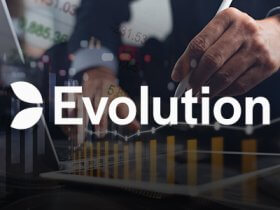 Evolution, the world’s most prominent supplier of live casino software and content both for online and land-based casinos, has announced its financial results for the third quarter and the numbers show a significant revenue increase.

In the third quarter of 2022, Evolution managed to generate revenue of 387.5 million euros, a figure which represents an increase of 37.1 percent over the same period of last year.

That growth was in part due to the company’s acquisition of Nolimit City, which was completed in August 2022. The supplier has also expanded through new partnerships, like the one forged with FanDuel for which Evolution set up two live casino studios in Michigan and Pennsylvania. During this quarter Evolution also opened a new live casino studio in Connecticut.

However, most of the company’s revenue came from Asia, a total of 127.8 million euros. The second most productive region was Europe (without Western Europe and the Nordic countries) with 115.3 million euros, while North America brought in 50.1 million euros.

Live casino games generated most of the company’s revenue, 310.4 million euros, a figure which represents an increase of 44.7 percent compared to the third quarter of 2021.

Martin Carlesund, the Chief Executive Officer of Evolution, declared himself pleased with the growth registered by the brand’s live casino products, but admitted that the company’s RNG (random number generator) games generated “not satisfactory” growth.

Random number generator games brought in revenue of 68.1 million euros in the third quarter of 2022, a slight increase from the 61.5 million that were generated in the same quarter of last year.

The Chief Executive Officer blamed the lack of new slot games for the unsatisfactory growth. Apart from NoLimit City, Evolution has acquired three more slot developers during the past couple of years: NetEnt, Red Tiger and Big Time Gaming.

Returning to the financial performance during the third quarter, the company’s earnings before interest, tax, depreciation and amortization (EBITDA) amounted to 261 million euros, while the total net profit for the quarter was 221.2 million dollars, an increase of 40.5 percent year-on-year.