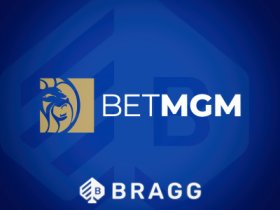 Bragg Gaming Group, the Canadian business-to-business iGaming technology and content supplier, has announced that its new content and technology is now live with BetMGM in Michigan, taking the company’s North American expansion a step further.

This deal means that Bragg Gaming’s new content and technology is now live with six iGaming operators across three North American markets. Earlier in December the Canadian company launched its content in New Jersey through a partnership with Rush Street Interactive.

Proprietary content from Bragg Gaming Group such as Egyptian Magic from Atomic Slot Lab studio, along with fresh titles from the Canadian company’s partner studios, will be made available to customers of BetMGM in the state of Michigan through Bragg’s new Remote Games Server.

The online casino market in Michigan is extremely important and competitive, according to an estimate from H2 Gambgling Capital it will generate Gross Win of over 1.5 billion dollars in 2022. BetMGM is the biggest online casino operator in the state, with a market share of 38 percent in August 2022.

The cooperation between Bragg Gaming Group and BetMGM is not entirely new as the casino operator has been working with Spin Games, the studio that was recently acquired by the Canadian conglomerate. BetMGM has been featuring content from Spin Games for several years in New Jersey, Michigan and Pennsylvania.

Speaking about the renewed partnership with BetMGM, Lara Falzon, President and Chief Operating Officer at Bragg Gaming Group, explained that the Canadian company insisted that its existing North American partners include content from the new proprietary studios that Bragg launched this year.

The Bragg Gaming President and CEO also declared herself confident that this strategy will “help drive consistent, long-term growth.” Bragg Gaming Group started under the name of GiveMeSport and became more prominent in the iGaming industry in 2018, when it acquired content supplier Oryx Gaming. Since then, the company has further expanded its production capabilities by acquiring brands such as Wild Streak Gaming, Spin Games, Atomic Slot Lab and Indigo Magic.