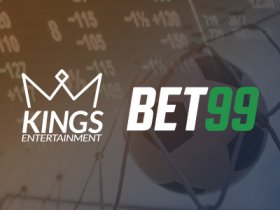 Kings Entertainment Group, the company which operates LottoKings and WinTrillions, has announced that it agreed a merger with Sports Venture Holdings, the parent company of Bet99, the famous Canadian online sports betting and casino brand.

The agreement between the two companies will see them combine into a single business. However, the deal won’t become effective until the shareholders of both entities approve the merger and then the proposal has to be approved by the Canadian Securities Exchange. During the approval process investors won’t be able to trade King Entertainment’s common shares on the Canadian Securities Exchange.

Under the terms of the agreement, after the deal goes through Jared Beber, the current Chief Executive Officer of Bet99, will become the CEO of the new merged business, while Steve Budin, the CEO of Kings Entertainment, will continue to be in charge of LottoKings and act in an advisory capacity.

Steve Budin, the current Chief Executive Officer of Kings Entertainment, revealed that his company is “led by pioneers of the international online sports gambling industry” and added that the combination with Sports Venture Holding will be “transformative for the Canadian sports betting sector”.

The Kings Entertainment CEO added that the company aims to become a leader in any of the jurisdictions it enters, and thanks to the merger that goal could become achievable in Canada.

Jared Beber, the current Chief Executive Officer of Bet99, described the agreement as “a natural step” for Sports Venture Holding because Kings Entertainment is “an internationally recognized online betting company”.

The deal would allow the Bet99 brand to enter the public capital markets as Kings Entertainment is listed on the Canadian Securities Exchange, and that should lead to the engagement of a broader range of investors.

Single-event sports betting has finally been allowed in Canada from 27 August 2021 after Bill C-218 was approved by the Senate. That led to a major expansion of the market in the country and to new opportunities for iGaming companies.