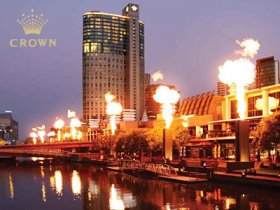 Crown Resorts, the most important and powerful land-based casino operator in Australia, received a hefty fine in the state of Victoria: 1 million Australian dollars for its failure to properly control junket operations at Crown Melbourne.

This is the maximum possible fine under the Casino Control Act and it was imposed by the Victorian Commission for Gambling and Liquor Regulation. Ross Kennedy, the chairman of the Commission, mentioned that this also was the first time Crown Resorts received the maximum fine.

“That fine reflects the seriousness of this matter,” the chairman added, insisting that the company’s failure to implement a serious control process over junkets occurred “over an extended period.”

Crown Resorts remains under investigation in Victoria after a similar inquiry in Sydney found serious problems, including the facilitation of money laundering through the company’s casinos. Several directors resigned following that report and the company promised to change its ways.

Following that investigation, Crown Resorts was deemed unsuitable to hold a casino license to operate its brand-new property in Sydney. The findings of the inquiry of the Victorian Commission for Gambling and Liquor Regulation could well lead to the suspension of the company’s license to operate Crown Melbourne as well.

The Light at The End of The Tunnel

However, Crown Resorts has already agreed to stop dealing with junkets, and that might satisfy the Victorian Commission for Gambling and Liquor Regulation and avoid the suspension of the license.

Meanwhile, the company has received a takeover proposal worth 8 billion dollars from Blackstone, a powerful private equity firm from the United States of America.

Until the offer is properly evaluated by the Crown Resorts board, James Packer, the company’s largest shareholder and former executive chairman, reached an agreement with the New South Wales Independent Liquor and Gaming Authority, limiting his power to influence the business.

The billionaire was allowed to keep his 37% stake in Crown Resorts in exchange for an engagement not to seek representation on the company’s board, share information with the company or have private discussions with stakeholders about the business. James Packer also agreed to give up the voting power that his 37 percent stake in the company would grant him.