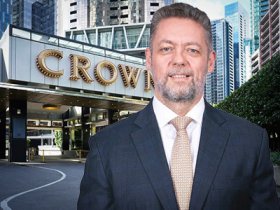 Crown Resorts, the largest owner and operator of land-based casinos in Australia, has announced the appointment of Ciaran Carruthers as the company’s new Chief Executive Officer.

The appointment comes shortly after the company’s takeover by Blackstone was completed. The international private equity firm already owned 9.9 percent of Crown Resorts since 2020, and now it has bought the remaining 90.1 percent for a total of 8.87 billion dollars.

Steve McCann, the previous Chief Executive Officer of Crown Resorts and of Crown Melbourne, announced his resignation shortly after the takeover was completed. Before taking the Crown Resorts job, Ciarán Carruthers was the Chief Operating Officer of Wynn Macau Resort.

Crown Resorts owns and operates Crown Melbourne, Crown Perth and Crown Sydney in Australia, Crown London Aspinalls in the United Kingdom, along with an online business.

The company announced that the new CEO will effectively take charge in September and added that for a while he will be working alongside Steve McCann in order to assure an orderly transition. Crown Resorts also pointed out that it will appoint new CEOs for two of its casinos as well: Crown Melbourne and Crown Perth.

Speaking after the appointment of Ciarán Carruthers, Chris Tynan, the Head of Real Estate Australia at Blackstone, revealed that the company “is committed to investing in Crown” in order to help it realize “its true potential as a world-class leader in travel and leisure.”

The appointment of Ciarán Carruthers is a part of that process, Chris Tynan described the new CEO as “a highly experienced and respected industry veteran”, a person who is also committed to continue “the transformation at Crown.”

Ciarán Carruthers began his career in Macau at Galaxy Entertainment Group in September 2022. He was the Chief Operating Officer of Waldo Casino, the first property that Galaxy opened in the country, and then held the same position at StarWorld, the flagship property of the company.

In 2009 Carruthers left Galaxy and embarked on a journey as a consultant in the gaming industry. Then he became Senior Vice President of Venetian Resort and Plaza Casino between 2013 and 2016, while in 2017 he was appointed as Chief Operating Officer of Wynn Macau. Ciarán Carruthers described himself as “extremely passionate about our industry” and added that he is looking forward to this new chapter in his career.