BetMakers Records Revenue Increase in First Half of Fiscal Year 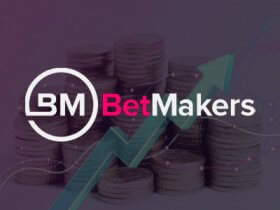 BetMakers Technology Group, the race betting operator and technology provider from Australia, has announced the company’s results for the first half of fiscal year 2021.

Revenue for the 6 months which ended 31 December 2020 was up 88% year-on-year, leaving the company with 68.6 million dollars in cash at the end of the respective period.

However, despite the increasing revenue, the company was unable to record a profit. BetMakers made a loss of 1.7 million dollars in earnings before interest, tax, depreciation and amortisation (EBITDA).

This fact is mostly due to the company’s increasing expenses related to its aggressive recent expansion into the United States online gambling market. BetMakers revealed that it spent almost 1 million dollars only for its efforts to enter the New Jersey fixed odds market.

At the end of 2020, BetMakers made an offer to acquire Sportech’s racing and digital assets in the United States, the United Kingdom, Europe and Asia. The offer was made for the Global Tote pari-mutuel technology division of Sportech and it was initially worth 56 million dollars.

Sportech’s shareholders had to approve the deal and at the start of 2021 an overwhelming majority of them voted in favour. Just 0.2% of the Sportech shareholders voted against the acquisition.

BetMakers, the company based in New South Wales, announced that it had raised around 38.28 million U.S. dollars through a public placement to help fund this acquisition. The company also revealed that the cash was raised after it offered more than 83 million shares to investors, priced at around $0.46 per share.

Now, the BetMakers board says the acquisition of Sportech’s tote and digital assets is set to be completed during the next financial quarter. This deal is expected to add significant new revenue streams for the company.

In the 2020 fiscal year, the tote and digital business, if combined with the company’s current operations, would have delivered an additional 56 million dollars in revenue and a profit of over 7 million dollars.

The acquisition is also crucial for the brand’s plans to grow its business in the United States. When the deal is complete it will give the company access to the market in 36 states and over 100 racetracks and casinos.

Moreover, the company is working on an exclusive agreement with the operator of Monmouth Park racetrack in New Jersey. If the deal goes through, BetMakers will manage fixed odds betting on horse racing at this venue as soon as the legal environment permits.