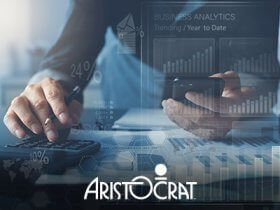 Aristocrat Leisure Limited, the Australian supplier of slot games for land-based and online casinos, has announced that it has recorded a net profit of over 1 billion dollars in the 2022 fiscal year.

The Australian company revealed that its net profit after tax and before amortization of acquired intangibles (NPATA) for the full year to 30 September 2022 has reached 1.09 billion Australian dollars, 27 percent more than the previous year.

Moreover, the company’s operating revenue during the full fiscal year has reached 5.57 billion Australian dollars, a figure which represents an increase of 18 percent compared to the previous fiscal year.

The company revealed that the impressive results have been driven by a very strong performance of its operations in North America. In fact, Aristocrat’s sales in this region went up by 66 percent during the 2022 fiscal year as the company expanded its video lottery terminal machines into Canada, Oregon and Illinois.

During the past year Aristocrat Leisure Limited sought to expand its business more and more into the online gambling segment. In October 2021 the Australian company made a multi-billion dollar offer to take over Playtech, one of the world’s top developers of video slots and live dealer games.

The bid did not go through as it was turned down by Playtech’s shareholders, but Aristocrat didn’t give up on its expansion plans through mergers and acquisitions, and in October 2022 it agreed a deal to acquire Roxor Gaming, an iGaming content supplier based in the United Kingdom.