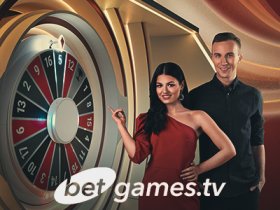 BetGames.TV, the award-winning global supplier of live dealer and betting games, has released a new and improved version of Wheel of Fortune, one of the most popular titles in its portfolio.

The new version of the game features an RNG-based automatic wheel, which allows enhanced speed for the gameplay. That should make players spend more time enjoying the game and also drive more revenue to the online casino.

The user experience is also improved by the introduction of a full-screen mode, making gameplay more immersive. There is a two-camera perspective during gameplay, and the users will also get the chance to study more statistics as they play.

The betting time was also enhanced, while the interaction between the dealer and the players will also be more substantial as the presenter will have access to statistics during gameplay.

The wheel itself has a new design, featuring a mechanical engine that powers the spin right after the dealer presses a button on a screen. The studio was also revamped, with a new background and fresh sound effects and music.

Along with the release of the improved version of Wheel of Fortune, BetGames.TV also announced that more of their titles will be enhanced in the near future, including War of Bets, Bet on Baccarat and Bet on Poker.

In addition to improving the already popular titles, the provider also releases new games regularly. Last month, BetGames.TV launched an original online version of Rock, Paper, Scissors, one of the most popular social games of all times.

At the end of 2020, BetGames.TV received two SBC Awards: Leader of the Year and Live Casino Supplier of the Year. The “Leader of the Year” award was given to Aiste Garneviciene, the Chief Operating Officer of BetGames.TV. She has held this position since the founding of the company, in 2012, and contributed to its development into an organisation that currently employs over 100 people and serves clients in more than 40 countries around the world.

Earlier this month, the company announced that it will open a brand new hub of operations in Malta, which will require the employment of another 100 people. BetGames.TV is streaming its live dealer games from its studios located in Vilnius, Lithuania and in Malta. Their operations are currently licensed at numerous regulated markets including the UK, Malta, Latvia, Lithuania, Estonia, Italy, and Bulgaria.