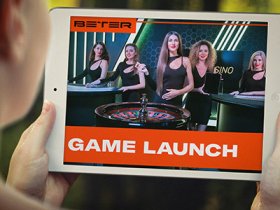 BETER, the well-known supplier of next-gen betting and gaming products, has announced the release of its first selection of live casino games, a few weeks after having revealed the company’s ambitions in the live gaming vertical.

The company’s first four live dealer games are ready to go live ahead of the festive period in December. The first four games released by BETER Live will be Roulette, Blackjack, Top Card and Baccarat.

The debut titles offered by the supplier promise to be dedicated to the next-generation type of player. In fact, these classic games will all be brought into the modern era through the presence of a high-tech twist.

The live dealer games offered by BETER Live are broadcast from a nicely designed studio and benefit from the presence of experienced casino dealers. For operators, the supplier promises localised server deployment and a wide range of complementary languages along with high-margin side bets.

Before getting into the live casino market, BETER was well-known in the industry as a powerful supplier of data and content for sportsbooks, with big-name clients such as Sportradar, Bet365, M88, William Hill and Fortuna Entertainment Group.

The live casino division of BETER is led by Anna Vikmane, who has previously worked at Playtech, the global supplier of slots and live dealer games, and Entain, the British gambling giant. BETER Live will feature proprietary in-house technology, which should guarantee reliability and an uptime of over 99.8 percent.

The Most Advanced Virtual Studio

BETER Live benefits from a strong team of live casino and television production experts, which operate what the company calls “the most advanced virtual studio available on the market.” Their broadcast will be available in full-HD and 4K resolutions, but also with lower bandwidth options for markets that require such adaptations.

Speaking about BETER Live’s first four titles, Anna Vikmane, Director of the live casino division, revealed that her team is “dedicated to championing a player-centric, entertainment-first approach” and expressed her confidence that these four titles will prove that.

“This is just the beginning of a very exciting journey for BETER Live”, Anna Vikmane added. The supplier promises its future partners no hidden fees, along with crypto-ready payment options and bespoke marketing tools.