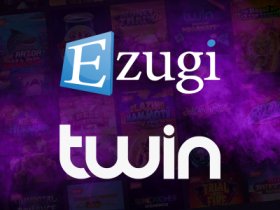 Twin Casino, an online casino that is fully available for Canadian players, has added another dimension to its offering through an agreement with Ezugi, the well-known supplier of live dealer games.

Players in Canada and several other jurisdictions around the world can now enjoy Ezugi’s exciting live casino titles, which were integrated into Twin Casino through game aggregators GiG and Oryx.

Twin Casino will include the full suite of Ezugi live dealer games, including international hits such as Lucky7, Andar Bahar, along with original titles such as Live Roulette and Unlimited Blackjack.

Twin started as an iGaming operator in 2017 and over the past couple of years it has evolved into a well-known international online casino. Now it has games from more than 30 of the world’s best suppliers into its offering, along with some intriguing in-house products such as Twin Races and a bespoke Christmas game.

Ezugi is a company that focuses entirely on live casino games and has established itself as one of the most important and influential players in this industry vertical. The business started out in 2013 in Israel and in 2019 it became part of the Evolution Group. The company owns studios in Romania, Latvia, Belgium and even Cambodia.

Last week Ezugi added a brand new product in its already impressive live casino portfolio: One Day Teen Patti Classic, an exciting new variant of a vintage game. The original Teen Patti has quite simple rules, players just have to bet on whether Player A or Player B will have the best three-card hand.

But Ezugi’s One Day Teen Patti Classic variant takes the excitement to the next level through the introduction of an exchange betting model, in which players can either back or lay.

The game features six betting rounds, and before each of the three cards are drawn the players will get to see dynamic odds that change based on the current favourite hand and also on the number of cards which remain to be drawn. In short, this innovative title is a mix between live casino action and in-play sports exchange betting.