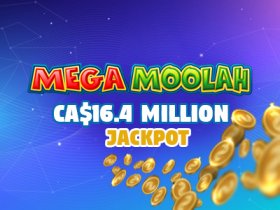 Microgaming has confirmed that its iconic Mega Moolah Progressive Jackpot slot has made one more millionaire, the first in 2020!

On Sunday 5 April, the lucky online casino player landed a massive prize worth €10,735,716.84 and as suggested claimed it in Canadian Dollars. Is the latest winner of a CA$16,4M Mega Moolah Progressive Canadian? Well, if so, Canada could aspire to the top position in terms of paid out awards.

Staggering CA$16,4M To Be Paid In Lump Sum

Another piece of good news is that the striking eight-figure prize will be paid to the player in a lump sum, as with all wins on the network, which is, by the way, the largest in the industry with more than €1.1 billion in disbursed winnings to date. Payments totaling €26 million have been made by the network during this year alone, with over 150 punters netting out at least €10,000.

…as the Microgaming’s Progressive Jackpot system reached a €1 billion milestone following a staggering €13.3 million payout on Mega Moolah slot hit by a Zodiac Casino player. In addition to that, March brought two millionaires in just 48 hours, when a mind-blowing €11,546,388.15 prize was hit on Tuesday while a €2,201,120.31 pot was landed the next day.

“We are thrilled for the victorious player who struck this staggering €10.7 million win – congratulations! Mega Moolah continues to be a favourite among players worldwide, and so we are excited to be adding more new progressive games to the jackpot and network throughout the year.“

Even though €10,735,716.84 is an astounding sum of money, this win is not the most impressive scattered on the map of Mega Moolah millionaires. In 2015, a UK player landed a phenomenal €17,879,645.12, yielding the software developer a GUINNESS WORLD RECORDS® title for the largest online slot payout. However, in September 2018, a patron of Grand Mondial online casino broke this record striking astounding €18,915,872.81.

Incredibly popular all around the world…

…Microgaming’s progressive network continues to grow as new releases are added on a regular basis. The most recent spinning adventures include Atlantean Treasures Mega Moolah created by Neon Valley Studios and Wheel of Wishes produced by Alchemy Gaming, the latter features upgraded and revamped WowPot jackpot.

The already-started year will bring slots buffs even more progressive treats, one of them Absolootly Mad™ Mega Moolah is set for network-wide launch on 5 May.