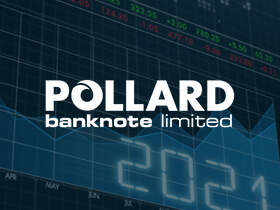 Pollard Banknote Limited, the lottery solutions provider based in Winnipeg, has released its financial data for 2021 and the figures show the company generated record-breaking revenue during the twelve months of the year.

The company’s revenue for 2021 amounted to 459 million Canadian dollars, more than it ever generated in its history that spans more than a century. In fact, Pollard Banknote was established all the way back in 1907, starting out as a commercial printing business. Then, in the 1970, the company made the move towards security printing and eventually into lotteries and iGaming.

John Pollard, the co-Chief Executive Officer of Pollard Banknote, described 2021 as “a very successful year on a number of critical fronts”. Moreover, John Pollard revealed that the company expects to see “exceptional demand” from the customers continue in 2022.

The company, which has its main headquarters in Vienna, Austria, was mainly focused on Europe and Asia, providing lottery solutions in various jurisdictions. Next Generation Lotteries purchased Novomatic Lottery Solutions from NOVOMATIC AG on October 31, 2019.