Playtech Launches “Who Wants To Be A Millionaire?” Live Roulette 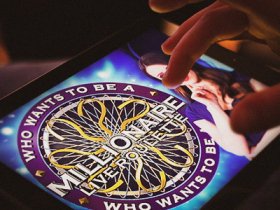 Playtech, one of the world’s biggest providers of slots and live dealer games for online casinos, has announced the launch of a brand new product in its live casino suite: “Who Wants To Be A Millionaire?” Live Roulette.

This new live casino game show is the first palpable result of the exclusive five-year partnership that Playtech signed with Sony Pictures Television, the company that owns the rights for many successful television formats.

“Who Wants To Be A Millionaire?” Live Roulette is based on the famous television show that has been adapted and broadcast in over 120 countries from all over the world. The game was created in close collaboration with a team designated by Sony Pictures Television.

Moreover, Playtech has revealed that this is just the first game of a series of three titles that will be developed in partnership with Sony Pictures Television. “Who Wants To Be A Millionaire?” Live Roulette features a highly innovative gameplay experience, boosted by the popularity of the brand.

The game also allows players to take part in the game even when they do not have an actual active bet. The game has a so-called “Millionaire Round”, in which players can just guess the outcome and play for fun.

The game developed by Playtech also includes the well-known and loved features from the television show: 50/50 and Ask the Audience. There is also a new feature called Ask the Host, which gives players the chance to have incorrect answers removed based on the level of question they have reached.

Playtech has a lot more to come when it comes to adapting television shows to the online gaming market. Earlier this year, the supplier signed a similar agreement with AMC Networks, the big American television and entertainment company.

The deal’s purpose was to grant Playtech worldwide rights to create branded online games based on popular television programmes created and produced by AMC Networks. The list includes formats that are well-known in a lot of countries, such as The Walking Dead, Marriage Boot Camp and Bridezillas.

Playtech has already begun working on the games, without revealing any of the actual titles, though. However, the supplier did reveal that the majority of the games based on AMC Networks shows will be launched in 2022.