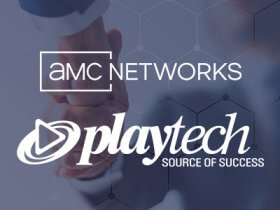 Playtech, one of the world’s most important providers of video slots and live dealer games for online casinos, has reached a new agreement with AMC Networks, the big American television and entertainment company.

The deal’s purpose is to grant Playtech worldwide rights to create branded online games based on popular television programmes created and produced by AMC Networks. The list includes franchises that are well-known all over the world, such as The Walking Dead, Marriage Boot Camp and Bridezillas.

Playtech will begin working on the games right away, aiming to release the first slots of this series by the end of 2021. However, the majority of the games based on AMC Networks shows will hit the market in 2022.

Speaking about the opportunities created by this agreement, Shimon Akad, the Chief Operating Officer of Playtech, revealed that being chosen by AMC Networks as an exclusive partner is a real honour for his company. Moreover, the partnership “demonstrates Playtech’s continued commitment to delivering an entertainment-led experience to key strategic audiences across regulated markets.”

Clayton Neuman, Vice President of Games at AMC Networks, added that delivering the explosive action from their TV series into the online gaming world should give players a world-class gaming experience.

At the same time, Playtech decided to join the All-In Diversity Project, an initiative which is designed to benchmark diversity, equality and inclusion in the betting and gaming industry.

As a member of the Project, Playtech will gain access to information, webinars and training related to diversity, equality and inclusion. This membership fits right into Playtech’s “Sustainable Success” strategy, which aims to achieve business growth in a way that doesn’t harm people (either employees or customers), the environment or the industry.

Playtech was founded in 1999 and has developed into a powerful provider of video slots and live dealer games for online casinos. The company has around 6,400 employees in 24 countries, and it’s already famous products can be found in almost all the largest online casinos in the world. Playtech’s live casino titles are currently broadcast from studios in Latvia, Estonia, the Philippines, Romania and the United States. Last month, Playtech launched a dedicated live casino studio for Sky Vegas.