Playtech Increases Profits In First Half Of Fiscal Year 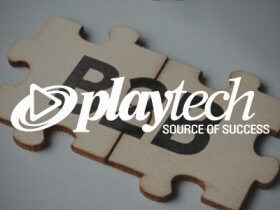 Playtech, one of the world’s most important providers of video slots and live dealer games for online casinos, has announced that it recorded increased profits in the first half of the 2021 fiscal year.

The gaming developer reported that it recorded revenue worth 457.4 million euros for the first six months of the year, down 4 percent from the 476.7 million that it accrued in the same period of 2020.

However, the business-to-business gambling segment drove in revenue of 267.2 million euros, representing an increase of 19 percent compared to the previous year. The company experienced strong growth in Mexico in particular, but other regulated markets such as Colombia, Poland, Italy and Greece did very well too.

Playtech also expanded quite aggressively in the United States as well, with Parx Casino launching an online casino in Michigan on the developer’s IMS Platform and Player Account Management software in April. Overall, revenue from the Americas increased to 46.4 million euros, which is more than double compared to the previous year.

However, revenues from the United Kingdom saw a decline of 10 percent to 59.6 million euros. The poor results on this market were largely due to retail closures that happened as a result of the novel coronavirus pandemic and the various lockdowns that affected the nation. These measures mostly impacted Playtech’s business-to-business sports betting segment.

In Europe, revenue from business-to-business gambling products increased to 66.5 million euros, mainly from big licensees such as Totalizator Sportowy in Poland and Sisal in Italy. Unregulated markets performed well too, with revenue from Asia increasing by 6 percent.

Nevertheless, the business-to-consumer gambling segment was impacted more significantly by the novel coronavirus pandemic, with revenues falling by 22 percent to 196.6 million. The most important factor that impacted this segment was represented by retail closures in Italy impacting Snaitech, Playtech’s subsidiary in this country.

Playtech spent 333.3 million euros in operational costs during the first six months of the year, 9 percent less than in the similar period of 2020 . That contributed to adjusted earnings before interest, taxes, depreciation, and amortization (EBITDA) of 124.1 million euros for the period, which was up 13 percent from last year.

The adjusted EBITDA increase was due to the strong performance of the higher margin online business both in business-to-business and business-to-customer segments.