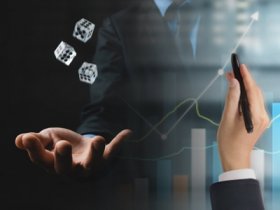 The month of September was exceptional for the online gambling market in the state of Pennsylvania, and the industry helped push the overall market revenue in the state up 1.1% year-on-year.

The Pennsylvania economy managed to produce a total revenue of 284.2 million dollars in September 2020, which is a slight increase compared to the 281.2 million that characterized the same month last year.

The overall growth of the state economy is largely due to the staggering increase in iGaming revenues. In fact, the income of this industry has recorded an incredible 1,290.2% increase compared to September 2019.

That performance surpassed the record that was set in August 2020, when the iGaming industry produced revenues of 55.9 million dollars.

The online gambling market in Pennsylvania was dominated by Rivers Casino Philadelphia, who recorded 16.1 million dollars in revenue. Penn National and partners DraftKings ranked second with 10.2 million dollars, and the Valley Forge Casino Resort and FanDuel placed third with revenues of 9.1 million dollars.

On the other hand, the land-based market in the state of Pennsylvania has recorded a decrease in activity, mainly due to restrictions caused by the novel coronavirus pandemic.

In fact, land-based slot revenues diminished by 16.4% year-on-year to 157 million dollars, as the number of active machines went down by 29.3% compared to last year. Table game revenue also dropped by 16.2% compared to September 2020.

Looking to the Future

In recent months, several big iGaming companies have shown their interest in the Pennsylvania market. In September, NetEnt reached an agreement to include their video slots in tribal operator Wind Creek Casino’s iGaming offering, after having entered the state market in 2019.

Moreover, in October the same Swedish company made another step into Pennsylvania and its growing market by striking a deal with The Cordish Companies to include their software and content in online casino PlayLive!.