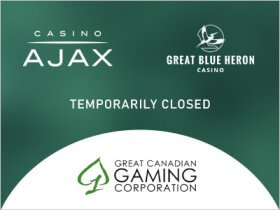 Great Canadian Gaming Corporation, one of the largest gaming and entertainment companies in the country, has decided to suspend activity at two of its venues in the province of Ontario: Casino Ajax and Great Blue Heron Casino.

Both locations reopened on September 28, after almost half a year of lockdown due to the novel coronavirus pandemic. Now there are serious concerns about the health and safety of people in the province of Ontario, and the government has restricted casino operations once again.

Great Canadian Gaming also owns a casino in New Brunswick, and for now that venue will remain open but with an occupancy limit of 50 people. The company currently operates 25 gaming, entertainment and hospitality facilities in Ontario, British Columbia, New Brunswick and Nova Scotia. There are currently 9,500 employees working for the Corporation across the country.

In the Middle of A Takeover Bid

Despite the ongoing difficulties caused by the pandemic, the entertainment company has attracted interest from a big global investor. Last week, Apollo Global Management, a powerful private equity firm, decided to acquire the Canadian casino operator in a deal worth just over 2.5 billion U.S. dollars, or 3.3 billion Canadian dollars.

The deal has not gone through yet as it is still awaiting several approvals, but the Great Canadian board of directors has already voted unanimously in support of the proposal. The shareholders will also get their say in a meeting that is scheduled to take place in December.

Great Canadian was established back in 1982 and since then it has grown into one of the largest gaming and entertainment companies in the country. Last year, the company produced revenues of 1.3 billion U.S. dollars. The EBITDA profits were equally impressive, just over half a billion dollars.