Great Canadian Gaming Corporation Is Proud Of Its 2019 Performance 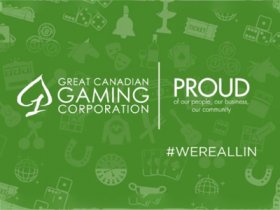 Great Canadian Gaming Corporation, one of the largest entertainment companies in Canada, has announced its financial results for the fourth quarter and the full twelve months of 2019. The report shows that both periods were very successful given the revenue growth of 8% and 15% respectively compared to the previous year.

“2019 was a productive year with construction activities ramping up on several significant developments that will continue through 2020 and 2021. In December 2019, we also successfully on-boarded our new Chief Operating Officer, Matt Anfinson, who brings the skills and experience required to optimize on operational opportunities at current facilities, as well as develop strategies to successfully launch our new properties under development.“

Yearly Revenue Up By 15%

According to the report, excellent performance in 2019 was stemmed from the expansion of gaming and non-gaming amenities in the Ontario properties. The revenues reached $1,355.6 million while adjusted EBITDA saw a spike from $466.0 million for the same period of 2018 to impressive $557.3 million.

Mr. Baker stated that he is also pleased with the company’s efforts aimed at improving its capital structure, mentioning „the previously announced accordion increase to the Company’s senior secured revolving facility, closing the senior unsecured debenture offering, as well as the substantial issuer bid offer to shareholders“.

…caused by the implementation of IFRS 16 ( International Financial Reporting Standards) were also highlighted, the decrease of net earnings (by $4.6million in the fourth quarter and $17.5 million in the full year) was one of them.

At the same time, amortization expense was increased by $21.1million in the fourth quarter and $83.7 million in the full year due to specific lease payments, which were earlier identified as “property, marketing and administration” expense, being recorded against lease liabilities.

Noting the company’s stable financial position, which among other factors, reflects in cash of $329.7million, as well as imposing available capacities on the Senior Secured and OTG’s revolving and capital expenditures credit facilities, Mr. Baker has a lot of reasons to look to the near future with optimism.

Speaking of the plans, he said:

“The casino building portion at the Pickering Casino Resort with the various dining amenities is near completion and is expected to open by the end of the first quarter of 2020. In Ontario, we are on track for the hotel and entertainment venue at the Pickering Casino Resort to open by the end of 2020, and continue to make progress on Casino Woodbine expansion, Great Blue Heron Casino hotel, and West GTA development programs.“

He also affirmed the company’s commitment to looking for further opportunities able to boost guest experience at all the properties and casinos revealing Great Canadian plans related to capital investments in their B.C. entertainment facilities.