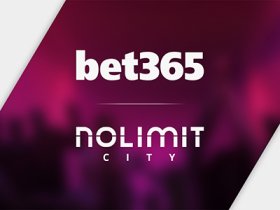 Nolimit City, the casino games supplier that was recently acquired by Evolution, has announced that it signed a major deal with bet365, one of the biggest online bookmakers in the world.

The agreement will see casino games from Nolimit City being added to the offering of bet365’s online casino as the sportsbook brand is looking to gain a bigger market share in the iGaming market.

Malcolm Mizzi, Chief Commercial Officer and Managing Director of Nolimit City, was ecstatic at the signing of this deal, his exact phrase was “we’re left lost for words with this one!”

The Nolimit City executive added that his team felt “immense pride and jubilation” after becoming partners of one of the biggest brands in the industry and underlined that this shows just how much the supplier grew in recent years.

On the other hand, a spokesperson for bet365 revealed that their online casino is looking to add more and more gaming content partners in order to add exciting new titles to their offering.

Acquired By Evolution For 300 Million Euros

At the end of June 2022, Evolution, the world’s biggest supplier of live casino software and content, announced that it had reached an agreement to acquire Nolimit City in a deal worth 300 million euros.

The agreed price has two parts, 200 million euros were to be paid up front, while another 140 million euros will be paid depending on the company’s future performance in 2023, 2024 and 2025. At that time, Evolution also announced that it did not need to borrow money to complete the deal as the entire sum was available in cash in the company’s existing reserves.

Through this deal, Nolimit City became the fourth slot games brand in Evolution’s portfolio. The Swedish company made its first step in this industry vertical in 2020 when it acquired NetEnt, which already owned Red Tiger. Then, in 2021, Evolution went on to acquire Big Time Gaming, the Australian developer that first released the extremely popular Megaways game mechanic.

Nolimit City has had solid financial performances lately, and in 2022 the studio announced it expects revenue of 30 million dollars while its earnings before interest, tax, depreciation and amortization were expected to be around 23 million euros.